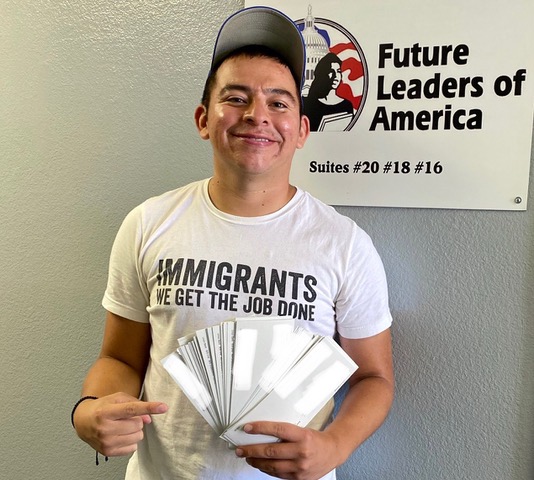 For many of the 100,000+ undocumented immigrants estimated to be living in Santa Barbara and Ventura counties, the COVID-19 pandemic has caused serious economic hardship. Many of these individuals are employed in agriculture, domestic service, and the hospitality sectors — sectors hit especially hard by the pandemic — but they do not qualify for the unemployment benefits or CARES Act stimulus funds that others receive. The 805 Undocufund provides assistance to these struggling workers and their families, but the funding available addresses only a small fraction of the need.

Established in the aftermath of the Thomas Fire and 1/9 Debris Flow and resurrected with COVID-19, the 805 Undocufund is jointly run by CAUSE (Central Coast Alliance United for a Sustainable Economy), MICOP (Mixteco Indigena Community Organizing Project), and FLA (Future Leaders of America), with the Ventura County Community Foundation as the fiscal sponsor. For this phase, FLA is administering the funds.

To date, $1.8 million has been distributed to 1,735 households, with an average grant size of just over $1,000. When it began the program on March 21, FLA was deluged with 1,300 applications in the first two days. It received thousands more before closing to new applicants at the end of April. Just over half the applications came from Santa Barbara County residents.

In the aftermath of the Thomas Fire and 1/9 Debris Flow, intake for the 805 Undocufund was done in person at clinics. COVID safety concerns caused FLA to adopt an online application process this time around. The controversial nature of the mission — assisting undocumented immigrants — made encryption software necessary to safeguard client information. Threats received during program administration forced a pause to upgrade to an even more secure system. Processing has resumed with an expanded, trained staff, but according to FLA Executive Director Eder Gaona-Macedo, existing funding will not come close to meeting the needs of undocumented immigrants in the two counties.

For Gaona-Macedo, who himself arrived undocumented, this work is very personal. He related how undocumented immigrants are the backbone of our community, including in the City of Santa Barbara. Of those applying for assistance, 39 percent work in the hospitality sector (bars, restaurants and hotels). During these difficult economic times, the 805 Undocufund proceeds are not enough to keep families afloat. Some of these families, Gaona-Macedo noted, have been without income since Governor Gavin Newsom’s March 19 lockdown order.

MICOP Associate Director Genevieve Flores-Haro noted that there was no aid for the remaining undocumented immigrants, whose total is estimated to exceed 100,000 in the two counties, and the one-time payment, for those who received it, was much less than what other laid-off workers receive each and every week in unemployment benefits.

In mid-May, during the first week that MICOP had phone lines set up for the program, they received 130,000 calls to the Santa Barbara office and 150,000 calls to the Ventura County office. The lines crashed the first day but were up and running the next. All $2,750,000 received by the state was distributed before the end of June, with about 62 percent going to Ventura County residents and the remainder to those in S.B. County.

Flores-Haro is thankful for DRAI but sees it as a just drop in the bucket, noting that the idea behind the program was to get aid to one out of six undocumented immigrants, and it fell woefully short of even that modest goal. She related how MICOP clients are hardworking people who have borrowed money from family, friends, or loan sharks to pay their expenses and now need to pay that money back. She fears the escalating damage to these families as COVID continues and aid is not forthcoming. Some undocumented immigrants have lost jobs, others have had their hours cut, and others are still working but are coming up short. She noted that the average farm worker employed full-time in non-COVID times makes only $15,000 to $20,000 per year.

According to CAUSE Policy and Communications Director Lucas Zucker, undocumented immigrants have been disproportionately impacted by the pandemic because of the industries they work in and because of their economic circumstances pre-COVID. The need is so immense, Zucker maintains, that systemic change is needed: A safety net for everyone in the community for difficult times — from pandemics to wildfires — regardless of immigration status. Gaona-Macedo echoed these sentiments, emphasizing the need for unemployment assistance for all workers.

A bill in the CA Assembly, supported by CAUSE, MICOP, FLA, and many others, to provide ongoing weekly income support for undocumented workers who are unemployed through no fault of their own did not gain the legislative support necessary to be included in the state budget. The CA Policy and Budget Center estimates that undocumented immigrants contribute more than $3 billion annually to California’s state and local tax system, yet they are denied unemployment and other benefits.

To donate to the 805 Undocufund, go to vccf.org/donate/805-undocufund-donation/.