Read the full story below or on the VC Star website. 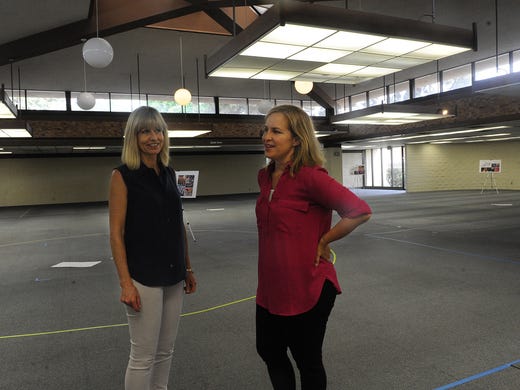 From left, Meryl Chase, vice president of the kidSTREAM board of directors, and Kristie Akl, president, tour the former Camarillo Library. They plan to turn the facility into a new children’s museum called kidSTREAM.  CHUCK KIRMAN/THE STAR

An up-and-coming children’s museum in Ventura County got closer to becoming a reality when it reached a deal with Camarillo to occupy the space of the former city library after months of negotiations.

The kidSTREAM museum — “STREAM” stands for science, technology, reading, engineering, arts and math — will be at the former library site at 3100 Ponderosa Drive. The deal was completed June 13 when the Camarillo City Council unanimously approved the rental agreement.

Meryl Chase, vice president of the kidSTREAM board of directors, goes over plans for the old Camarillo Library. Plans call for the facility to become a new children’s museum called kidSTREAM. CHUCK KIRMAN/THE STAR

Kristie Akl, chairwoman of the museum’s board of directors, said the deal was reached after extensive behind-the-scenes preparation.

“We were in an exclusive negotiating agreement with the city for close to 18 months. During that period of time, we did a formal feasibility business plan, fundraising feasibility, an impact study, our full concept design,” Akl said. “We essentially did our homework so intensely that we were fairly certain that it was a go.”

Akl said the board wanted the library site for kidSTREAM because of its outdoor space. The site covers approximately 2 acres, including 16,670 square feet of the building itself.

Although the museum has entered a rental agreement with the city, it will not immediately occupy the full site until more funds have been raised.

“We’re converting about 2,500 square feet of what will eventually be a programming room. … This will probably be our space for the next year and a half to two years,” Akl said.

In addition to the rental agreement, kidSTREAM was awarded a $30,000 grant on June 27 by the Ventura County Community Foundation to help create its “vision room,” a wing planned for the museum where children can give feedback about what they want to see at the museum.

To celebrate the soft opening of the vision room, the museum is holding a free event called “Kids Dream of kidSTREAM” on Aug. 4. Although the guest list for the event has been capped, Akl said it will be far from the only event held in the space that’s open to the public.

While the museum will operate out of the section of the building starting next month, the full opening of the museum is still years away.

The capital campaign aims to raise $15 million, and construction cannot begin until 60 percent of that funding has been raised, according to Akl. The goal for the museum’s full opening is summer 2021.