Read the full story below or on the Thousand Oaks Acorn website. 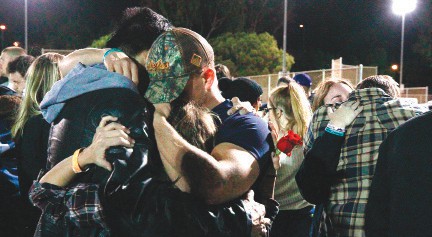 NOT ALONE—Friends of those killed at Borderline embrace each other during a Nov. 13 candlelight vigil at Pepper Tree Playfleld in Newbury Park. Vanessa Bechtel, president of the Ventura County Community Foundation, announced this week that monies from the Conejo Valley Victims Fund were helping to pay for memorials for the 12 killed during the Nov. 7 shooting. VCCF operates the fund. RICHARD GILLARD/Acorn Newspapers

A month after the Borderline shooting and the Hill and Woosley fires hit Thousand Oaks, donations to support those affected continue to pour in, and the Ventura County Community Foundation is working to hand them back out.

The foundation set up the Conejo Valley Victims Fund almost immediately after the Nov. 7 mass shooting that left 12 people dead. When the fires became a threat, it established a support fund for those affected by that disaster.

“It’s been really intense, with the two tragedies. . . .” said Vanessa Bechtel, foundation president. “The support has been like nothing I’ve ever seen before.”

The Borderline funds are being awarded to survivors of the shooting and to the families of those who lost their lives. Already, $240,000 has been provided to cover memorial/ funeral costs, Bechtel said, all hand delivered by Thousand Oaks Police Chief Tim Hagel.

Early disbursements from the fire fund are going to nonprofit organizations who lent a hand during and after the dual blazes.

More than $500,000 in grants have gone to 12 organizations focused on providing immediate support to those affected by the fire. Grants have ranged from $500 to $150,000, with the American Red Cross being the recipient of the most money, $411,250 paid in three grants for a items and services including recovery coordination, general operations support and an emergency response vehicle.

Other types of support from various nonprofits include adult day care, meals and support for seniors who were evacuated; costs of evacuating those on hospice; costs associated with emergency child care; and evacuation, hauling and feeding of horses.

Bechtel said VCCF does not have a total tally of how much money has been donated to the funds just yet because not all donors have clearly marked which fund the money was intended for.

“We’re trying to clarify intent because we had such an unusually large number of people who just put ‘disaster’ on their donations, and we want to be sure their intention is honored,” she said.

Bechtel said she expects to have a total donation amount for each fund by next week. In the meantime, the foundation is working with an independent auditor and will be publishing a report people can view on vccf.org.

“I think it’s really important for transparency and community trust and to remind people we’re here to be a service to their community,” Bechtel said.

To donate or to apply for an organization fire-related grant, visit vccf.org.