VCCF recently visited two local nonprofits focused on the environment and animal welfare, the Ojai Valley Land Conservancy and Greyfoot Cat Rescue and Sanctuary. Impact Officer Alyssa Torkelson wrote about her experiences and what she learned during these site visits.

Recently, members of the VCCF team were fortunate to visit the Greyfoot Cat Rescue and Sanctuary, and “Sanctuary” is truly the word that I would use to describe it. Built in 2001 on a property in Oak View, the sanctuary is nestled in the dappled shade of majestic oak trees, and is decorated with quirky, artistic, hand-carved signs.  Inside the main building of the property are the cats that are adoptable, including a shy, sweet, orange tabby named Rojo Flameagain, a classically beautiful calico named Callie, and playful, affectionate Carmella. See more of their adoptable cats here. Joan and the volunteers ensure that the adoptable cats are well socialized, litter box trained, and ready for forever homes.

The feral cats are housed in a beautiful, large outdoor enclosure, complete with high, wooden towers and walkways, various structures providing hiding areas and shelter, and natural landscaping. The cats that live in this enclosure are unable to be rehomed, and will live out their lives in their very own cat “Shangri-La”, safe, warm, fed, and loved. Many of the feral cats are still shy of humans, but one, a self-assured, black and white cat named Scotty, full of personality and curiosity, immediately greeted us as we toured the enclosure, following us as if taking over as tour guide.

Greyfoot Cat Rescue’s origin story is an inspiring testament to the quiet kindness often found in animal lovers, and how when one person creates a networking web with other passionate, like-minded people, there is so much that they can achieve together. So far, this year, they were able to assist 148 cats and kittens through spay and neuter, Trap/Neuter/Return (TNR) programs, sanctuary, adoptions, and veterinary surgeries.

It all started when Joan Geddes moved from Los Angeles to a rural property in Ventura County and she noticed that there were a large number of cats living nearby, seemingly having no owners. Many of these cats fell prey to coyotes, some becoming sickly, but even with all of the dangers, the females continued to produce litters of kittens, and the cat population grew. This experience was instrumental in inspiring Joan to create Greyfoot Cat Rescue in 1999 as a way to address feline overpopulation and to prevent cruelty to animals by preventing the birth of unwanted cats and kittens.

There are an estimated 30 to 70 million homeless cats currently living in the United States. Female cats can become pregnant at 4 months of age, and a typical female cat in a feral colony has about two litters per year, each producing an average of three kittens. Two unsterilized cats can produce up to 5,000 cats in a seven year period. Joan believes that Ventura County needs a full-time, mobile TNR specialist dedicated to a high-intensity trap-neuter-return program. She says there are enough veterinarians who offer free neutering and spay services for feral cats, but that most of the people working to trap the feral cats are volunteers who are trying to do it in their spare time, often alone. A study recently published in the journal, Frontiers in Veterinary Science, reports that over a 10-year period, free-roaming cat populations managed by a high-intensity trap-neuter-return (TNR) program dramatically reduced the population growth, and experienced 31 times fewer preventable cat deaths than when no action was taken.

If you are able, please visit their website and adopt, volunteer, foster, sponsor, or donate. 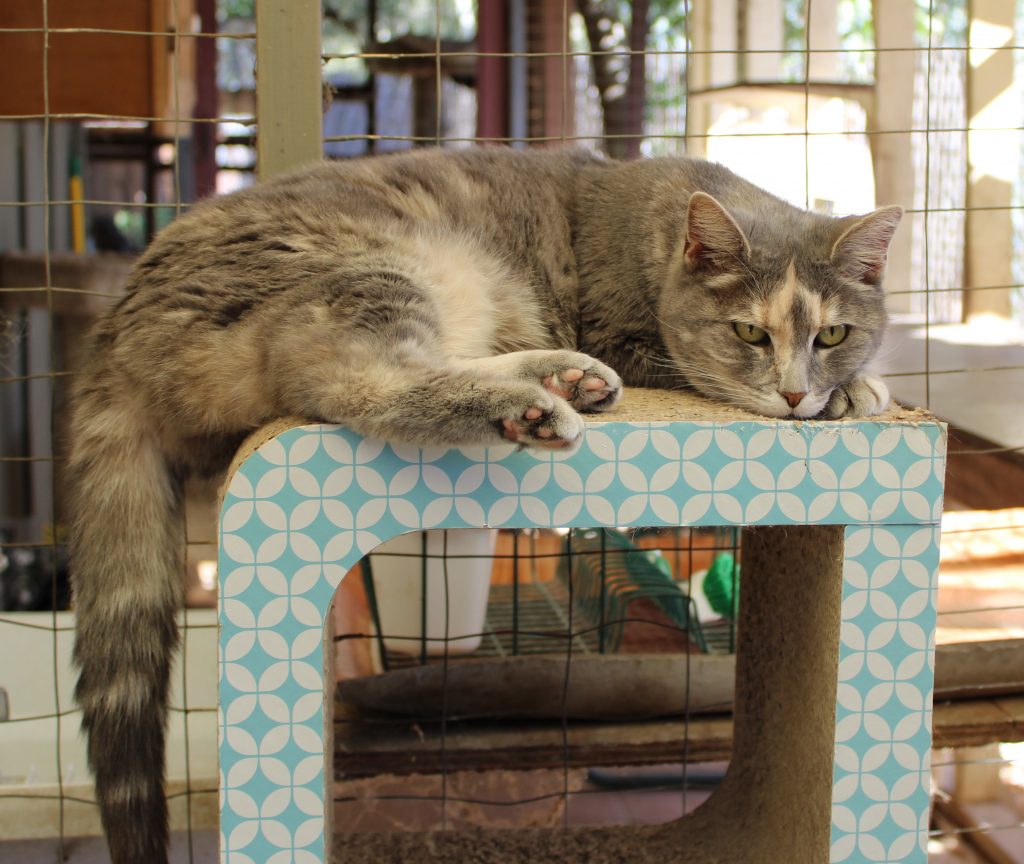 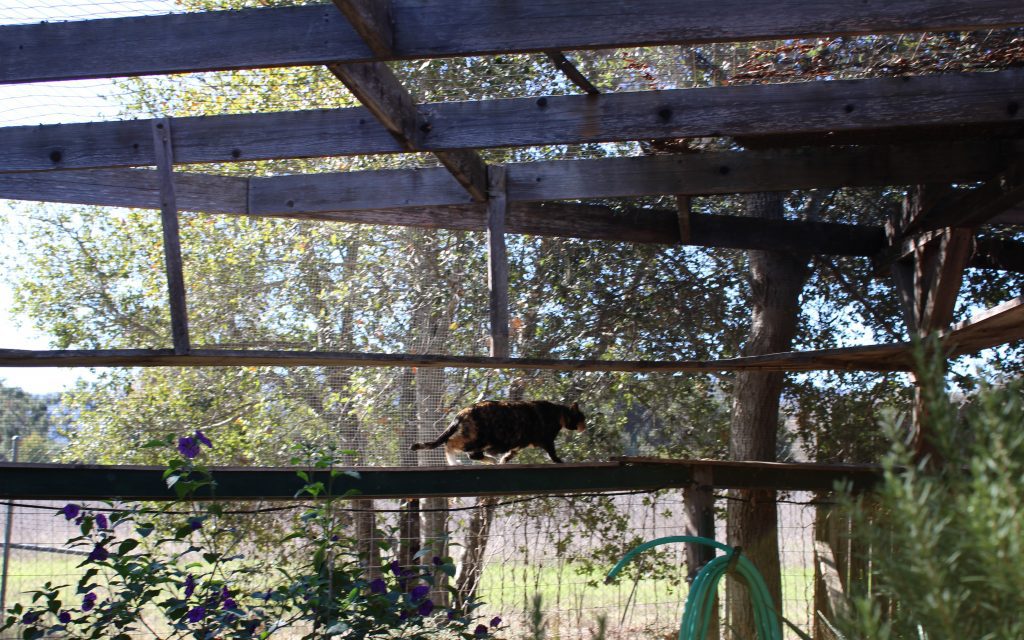 The Ojai Valley is known for its undeveloped hillsides, oak trees, hiking trails and the great expanse of wilderness that overlaps the edges of town.  Managing nearly 2,400 acres in the Ojai Valley, the Ojai Valley Land Conservancy serves as steward, protecting and restoring these wild places for current and future generations. The open spaces protected by the OVLC are preserved in perpetuity for the benefit of the community. As an Ojai native who loves hiking the trails and preserves that the OVLC maintains, I was excited about the opportunity to meet with Executive Director, Tom Maloney, and Deputy Director, Tania Parker, to learn more about the important work that the OVLC is doing.

We met early one morning at the Parkway Preserve site, 28 acres of land located close to the Ventura Avenue and adjacent to the Ventura River, that the OVLC recently acquired in partnership with the Trust for Public Land. A designated critical habitat for the endangered Southern California steelhead trout and southwest willow flycatcher, the Parkway Preserve was once zoned for industrial use to support oil fields. The OVLC plans to restore the land there, preserving the critical wildlife habitat and creating outdoor recreational use for the community of Ventura. There is not much to see at the moment, but Tom’s vision for the property is inspiring in the way that it serves to not only restore, protect and preserve the land, but to also provide the disadvantaged communities of North Ventura Avenue and the Westside Community of Ventura equitable access to recreational wilderness by offering enhanced entry to the Ventura River Trail, as well as creating communal recreation spaces for local families.

After our tour of the Parkway Preserve, we made our way to the Ventura River Steelhead Preserve, a beautiful property in near Foster Park, where the historic Steelhead House is located. The Ventura River Steelhead Preserve protects rare wildlife such as the endangered Southern California steelhead, as well as providing homes for over 29 other rare, threatened or endangered species. The Southern California steelheads, once estimated to have spawned 5,000 each year, have now been reduced to less than 100, which has been made worse with the silt that washed downstream after the Thomas Fire, filling the deep pools of the preserve and threatening the critical refuge for the migrating steelhead. The OVLC is optimistic that with time, they will be able to restore this critical habitat for the steelhead and other wildlife.

The OVLC would eventually like to turn the Steelhead House and surrounding buildings into an educational, research and outreach center to further their mission, and it is easy to see the appeal of such a project. The stone house was built in 1935 by former Ventura County District Attorney James Hollingsworth, and the place has a magical feel to it, as if it were frozen in time. To have an educational, research and outreach center in such a place would be incredibly beneficial to the community of Ventura County, and I could easily envision groups of children and youth engaged in educational tours, with teams of scientists doing research in the outbuildings. Unfortunately, the OVLC have not yet been able to get this project approved, however, with all that they have already accomplished for our community, I am certain that eventually, they will also make this a reality.

While touring the Steelhead Preserve, Tania described the native plant nursery expansion that the OVLC has planned as a part of their ecological restoration strategy. Currently, the OVLC collects and nurtures local plant stocks that are adapted to the specific climate and soils of the valley. Tania explained that scientists have found that the majority of native insects, vital to our ecosystem, will only utilize the native plants that they have evolved alongside. This means that it is imperative that native plants, from native seeds, are used in the ecological restoration of local habitats. Because of this, the OVLC plans to significantly expand their nursery capacity. They plan to triple their nursery output for restoration projects, other valley-wide restoration efforts, as well as offering the sale of native plants to the public.

Since 1987, the Ojai Valley Land Conservancy has been successfully working to protect, preserve, and restore the Ojai Valley’s special places, and our community and our wild places would not be the same without their tireless efforts.  We thank you for your commitment, and look forward to seeing what you accomplish next!

To learn more about the Ojai Valley Land Conservancy and how you can help our local environment, please visit their website here. To donate, please click here. For volunteer information, click here. 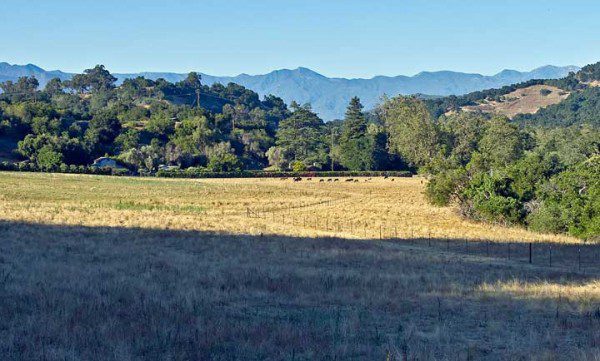