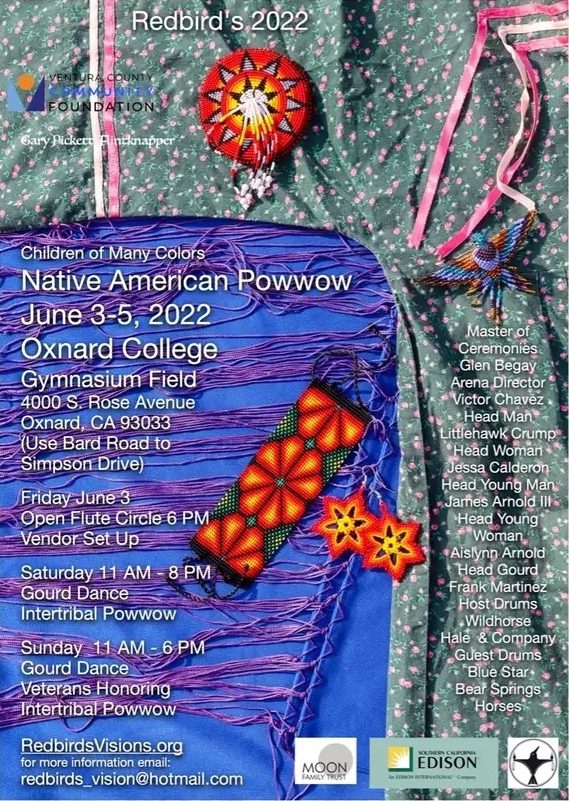 The voices of the singers will rise and the sound of the drums will resonate again as the Children of Many Colors Native American Powwow returns to Ventura County, with the support of the Ventura County Community Foundation, or VCCF.

The Barbara Barnard Smith Fund for World Musics supports the preservation and continuation of what is often considered non-traditional music. That includes what Indigenous cultures call their traditional music. Funds granted by the VCCF will be used as honorariums for five Native American drums at Redbird’s Children of Many Colors Powwow – Hale and Company, Wildhorse Singers, Blue Star, Bear Springs and Horses.

Songs in the native culture are not written. There is no sheet music. The songs are learned and remembered by singing them. A drum may know literally hundreds of songs, distinguishable by their beat, by the lead singer’s introduction, and memorized by the dancers who over time come to know a great many songs themselves…just the same way you immediately know a melody on the radio by its signature sounds.

A powwow is a Native American ceremony and celebration which welcomes the general public. Powwows are true cultural gatherings, not performances. Powwows knit the social fabric that is vital to the Indigenous community while creating an atmosphere of cultural immersion for visitors.

Redbird’s powwow is an intertribal gathering which prides itself in creating a friendly and supportive atmosphere for both participants and visitors.

The powwow began on a horse ranch in Moorpark, in 1994, when the organization Redbird was just freshly recognized as a nonprofit by the Internal Revenue Service. By 1995 the powwow had grow too large for the ranch and in 1996 was moved to Moorpark College. After a long sleep, from 1998 to 2004, the gathering was rekindled, and in 2006 it returned to Moorpark College.

There the powwow was held annually on the third weekend in July through 2019. Covid put a halt to the gathering, a cultural celebration including singing, dancing, arts, crafts, food and cultural demonstrations. When it came time to re-awaken the powwow, construction at the college had claimed the field where the gathering took place.

Oxnard College is the new home for the Children of Many Colors Powwow, and it will also have a new weekend – the family-friendly, everyone-welcome event be held the first weekend in June in 2022.

The program will remain much the same. Friday evening begins with an open flute circle to which all wind instrument players are welcome. This year there will also be fry bread and Indian tacos by the Wildhorse Café, a nonprofit Native American organization which promotes higher education and cultural continuity. The group supports its programs through its food booth, and keeps youth connected to their culture through its drum, the Wildhorse Singers, who will be one of the host drums for the powwow.

The powwow proper begins Saturday and lasts through Sunday evening. In addition to singing and dancing, the shopping opportunities are unique, with arts and crafts vendors coming from all over the west to participate.

Admission is free and everyone is welcome. Oxnard College is located at 4000 S. Rose Avenue in Oxnard, CA 93033

For more information visit RedbirdsVisions.org, or email redbirds_vision@hotmail.com. There is also a Facebook event page.

This story was originally published on Patch by Corina Roberts.