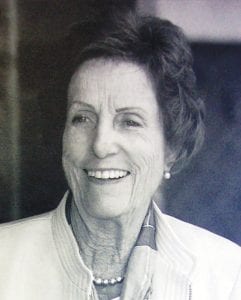 She was a philanthropist and a historian, a mentor to many and an inspiration to countless others who credit her for making Moorpark and Ventura County a better place to live.

The community is remembering Mary Leavens Schwabauer, who died Sept. 19 at age 93, as a woman who dedicated her life to serving others through her work with more than a dozen organizations and museums.

“She was a woman of great poise and endless generosity,” said Vanessa Bechtel, president and CEO of the Ventura County Community Foundation. “The impact that she had is unparalleled. I cannot think of someone who was involved in the creation of more community organizations.”

Schwabauer, who was born in Mexico in 1926, moved to Moorpark in the early 1960s with her late husband, Charles, to harvest lemons, oranges, limes, grapefruits and avocados for Leavens Ranches. The couple also had their son, David Schwabauer.

“She was one of the first dry farmers here in Moorpark, and the Leavens family has a long history in Moorpark,” Mayor Janice Parvin said.

As the couple laid down their roots, they got involved in the community as presidents of the Moorpark Chamber of Commerce. The two watched Moorpark become a city and saw the area grow and change over the next half century.

Beyond her farm work, Schwabauer was also a devoted teacher in the Moorpark Unified School District. To this day, her former students still remember her as one of the most influential voices and presences throughout their school years.

Schwabauer’s role as a teacher did not stop when she retired from the classroom.

The Moorpark resident continued to lead by example as she acted as a role model and mentor for other female leaders in the county.

Parvin said she and Schwabauer would spend hours talking about Moorpark’s past and their hopes for its future. When her mother died, Parvin said Schwabauer took on that role in her life.

“She was a mentor to me and gave me advice, and she did not shy away from giving advice,” Parvin said with a laugh. “Your heart hurts when you lose somebody that has been such an influence. She’s going to be in my heart for forever.”

The same rings true for Bechtel, who followed in Schwabauer’s steps as president of the community foundation. The county and its future were topics of many long conversations between the two, Bechtel said.

“She was a woman of vision and instrumental in who the foundation has become and a role model for organizations throughout our community,” Bechtel said. “She’s probably one of the most influential leaders we’ve ever had.”

Schwabauer was a staunch advocate for historic preservation.

She was one of the nine original members of the Moorpark Historical Society, sat on the Rancho Camulos Museum board and volunteered with the Museum of Ventura County.

She also spearheaded the creation of the Museum Alliance of Ventura County, formerly known as the Associated Historical Societies and Museums of Ventura County, which gathered volunteers from 30 county historical societies, museums and tourist bureaus.

“She was a huge advocate for historical preservation, and she took great pride in Ventura County and wanted to ensure that we could preserve our history and raise the visibility of our county as well,” Bechtel said.

Although Schwabauer is well known for her commitment to historic preservation, she also had a passion for the arts and music.

In fact, her dedication to the arts was so fervent that Parvin decided to alter the city’s requirements to allow arts commissioners to reside slightly out of the city’s limits.

“She lived just outside of our city limits, so I made sure we changed that because her outreach and her impact was so important,” Parvin said. “I know that she really enjoyed it.”

Throughout her life, Schwabauer believed that communities were the result of “time, effort and participation.”

“The value of the community is what you give back to it,” she told the Acorn in 2013.

And Schwabauer gave all she had back to Moorpark and Ventura County.

She was a member of the Moorpark Women’s Fortnightly Club, the National Society Daughters of the American Revolution and the New West Symphony board. She also volunteered with the Ventura County Civic Alliance.

A large portion of her community service was dedicated to the Ventura County Community Foundation, where she served as the first woman board chair and president from 2004 to 2008.

She also helped establish the foundation’s fund for farmworker housing in 2003 and started collecting scholarship money for local students in 1992. Her work helped grow the student scholarship program from $5,000 to more than $1 million a year.

“I think she really paved the way for active leadership from our community in many different areas, from our history to farmworkers to scholarships for students to an appreciation of arts and music,” Bechtel said.

This article was originally published by Moorpark Acorn.