Second Round of Free COVID-19 Antibody Testing Underway Through Nov. 20

One of the country’s most ambitious COVID-19 antibody studies is being conducted in Ventura County.

Residents of the county can once again get a free test for COVID-19 antibodies thanks to a new study funded by a grant from the Ventura County Community Foundation.

Testing will be offered in almost every city in the county from 9 a.m. to 4 p.m. through Nov. 20 and will be conducted on a first-come, first-serve basis. It is only available to Ventura County residents.

The tests allow members of the public to see if they have had the coronavirus, which causes the disease COVID-19, as well as collect data for research into how much a large population has been infected by the virus. It follows the first round of antibody testing which was offered over the summer during the county’s first spike in cases.

The tests involve a blood draw to check if a person’s immune system has created antibodies in response to a past infection with the virus. They are different from the nasal swab tests offered by the county and some health facilities, which check for current infection of the virus instead of past infection. Antibody tests cannot determine when exactly a patient had been infected with the virus.

“What is being undertaken in Ventura County is the most ambitious COVID-19 antibodies study in the United States currently underway,” said Matthew Fienup, an economist at California Lutheran University and one of the scholars involved in the study.

Among the distinguishing factors of the study are the thorough demographic data collected for each participant, the large number of people getting tested and the fact that positive antibody samples are run through a second antibody test by a different manufacturer to ensure accuracy, Fienup said. 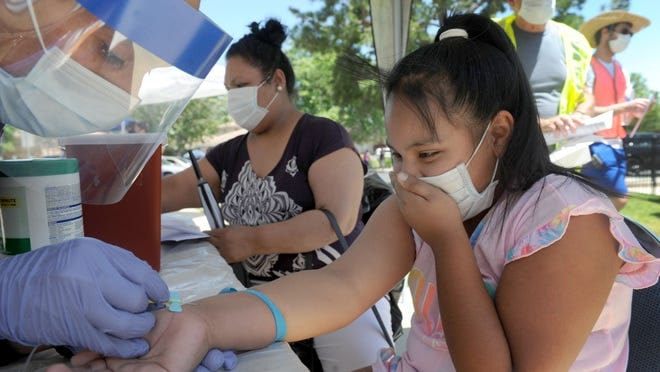 Dr. Todd Larsen, an emergency physician at St. John’s Regional Medical Center who has overseen the antibody tests, said the county actually never stopped testing people, rather that this is just the second time it has opened to the general public again.

The county has conducted 13,266 total antibody blood draws as of October, according to Fienup, over half of which were done during the first round of public antibody testing at the end of June.

The remaining antibody tests have been given to subpopulations who are either highly exposed to the virus or are vulnerable to serious illness. Samples include 2,620 first responders, 1,867 frontline healthcare workers, 266 longterm care facility residents and staff members, 154 farmworkers and 61 homeless residents.

The antibody data collected back in June found only 1.3% of participants tested positive for COVID-19 antibodies, while the remaining 98.7% did not.

Fienup said he expects that number to increase during this round of testing due to the higher number of cases recorded in the county. Larsen said his hypothesis is the number of positive cases will fall in the range of 4%-5%.

Fienup highlighted another significant aspect of the study, which is that researchers were collecting longitudinal data on participants who test positive, meaning they get tested again over a period of time to see what changes occur.

The longitudinal research is significant because it shows how long a person’s immune response to the virus lasts, whether it is lifelong like chicken pox or seasonal like influenza.

So far, among the 63 participants to test positive over time, all but one saw a decrease in antibodies between their first and second samples, Fienup said. The period between the two tests ranged between 36 and 66 days.

Larsen clarified that despite the near-universal decrease in antibody levels, the study has yet to encounter a patient who went from testing positive for antibodies to testing negative.

“They haven’t tended to go to nothing. They just go lower,” Larsen said.

All sites are open from 9 a.m. to 4 p.m. and function on a first-come, first-serve basis.

This article was originally published by Ventura County Star.