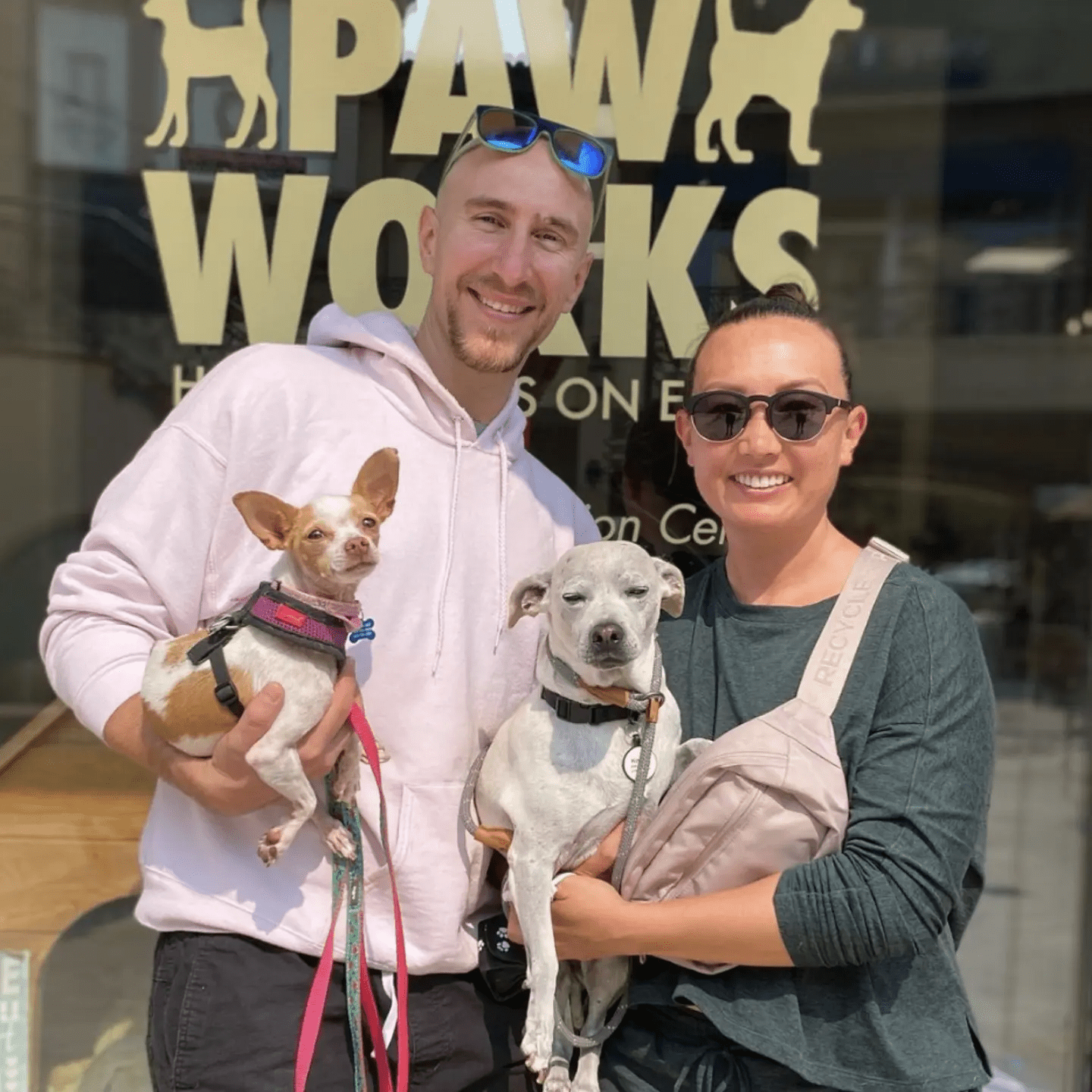 “It really is rewarding to pursue causes you connect to,” VCCF donor Karla Pozzi said. “Everyone has something they care about and connect to, and surely there’s a nonprofit tied to that.” Pictured are Karla and her husband, Brando, with their rescued chihuahuas at PAW Works, where the two have volunteered and donated.

VCCF Donors Brando and Karla Pozzi carried on the Smith family’s tradition of philanthropy with their significant gift to 805 UndocuFund during its most recent campaign. The Ventura County Community Foundation helped launch 805 UndocuFund in response to the ineligibility of undocumented residents of Ventura and Santa Barbara counties for federal disaster relief funds during the 2018 Thomas Fire. The organization, now a separate 501(c)3 nonprofit, continues to provide disaster support for undocumented immigrant families across the two counties. VCCF spoke with Brando and Karla about their giving and the Smith legacy they now follow.

The Martin V. and Martha K. Smith Foundation was founded by Brando’s grandfather Martin “Bud” Smith, a local philanthropist, business developer and entrepreneur, and Brando’s grandmother Martha. The Smith Foundation has had a major impact on the community, donating millions to local nonprofits and funding the construction of the original Boys & Girls Club of Oxnard as well as California State University, Channel Islands. The foundation joined as a supporting organization of VCCF in 1994, and Smith family members have helped facilitate its giving since Bud and Martha’s passings.

Brando is one of the Smith Foundation’s youngest board members, serving alongside several generations of relatives. He said that this experience has helped him to get to know the nonprofit world of Ventura County.

“It is inspiring to see the landscape of nonprofits in Ventura County and the region, and it’s hard not to get excited and emotional and affected by the great work people are doing,” Brando said. Beyond his work on the Smith Foundation, he also serves on VCCF’s Investment Committee, as well as on the McCune Foundation’s Investment and Grants Committees.

Brando and Karla’s philanthropic giving is driven by causes and interests that are close to their hearts, such as supporting local rescues like PAW Works as animal lovers, or being inspired to support land preservation in the California desert due to their passion for nature and camping. Additionally, the two care about supporting marginalized communities. Brando said he recognizes the difficulties life can bring even with privilege, and so he is motivated by imagining the difficulties that impact communities without the safety nets he has. Karla also said that her own life inspired their giving, having been drawn to 805 UndocuFund as the daughter of an immigrant and to give to support foster youth after her family’s experience of caring for two boys when she was younger.

“It’s really who we are, are these organizations,” Karla said.

Brando and Karla are happily married, living in Camarillo. While Brando has lived in Ventura County for almost his whole life, Karla is originally from Northern California. She moved away from home to Santa Barbara, where she met Brando, who now runs a family office formed by his late father Bruno Pozzi.

Brando, you come from a family with a history of philanthropy. How did this influence you growing up?

Brando – Fundamentally, being exposed to philanthropy at a young age. It happened during a developmental time for me. My grandpa and grandma passed when I was a teen, and seeing the legacy they wanted to leave and the good work they’ve done in the community, it was my first taste of philanthropy. Then I was lucky enough to be on the board of the Smith Family Foundation. I was lucky to have some agency in that and help plan on areas of specific focus for giving. My aunts and my mom have been champions of various causes, and even though we have different interests, I’ve learned from the family the importance of giving, and seeing the impact, and feeling the gratitude of the community.

Karla, do you have any experiences giving back to your community growing up?

My mom and her family have always done a lot of volunteering and philanthropy. They’re all religious, so they did a lot of activities at church. My mom met my dad when she graduated from college. She wanted to do something for the world, so she worked at an orphanage in Korea. My mom is American from here and my dad is Korean, so I wouldn’t even be here if my mom wasn’t so invested in doing good for the world. It really shaped me, and I was always involved in things since I was young, even if I didn’t want to be. (Laughs)

What influenced your decision to support 805 UndocuFund in giving to their recent campaign?

Brando – VCCF’s cosigning and implicit endorsement via the donation page and the website of the UndocuFund was fundamental, because it shows it’s an organization that should be supported. I’ve worked with the McCune Foundation (philanthropy partner of 805UF); I know that VCCF also supports the UndocuFund, so I know they’re doing good things. And the mission is incredibly important. It came to our attention during the 2018 fires here, and really during the pandemic, the need to help communities that maybe are on the fringes, that don’t have the explicit support of the government, that rely on a social safety net that is community-based. When the community as a whole struggles, it’s hard to fill in the gaps there, so it’s great what they’re doing. I’m proud that we’re associated in some small way with 805 UndocuFund.

Do either of you have any favorite stories about giving back to your community, whether it’s philanthropy, volunteering, etc.?

Karla – I have a funny one about Brando. To be on the investment committees, he did the VCCF fiduciary program and exam, and Vanessa (Bechtel, VCCF President & CEO) was telling us yesterday that he’s the only person ever to get 100 percent, but that’s not the funny part. What I like about it was when he did it, his dad printed it out and framed it in their office, and it was so funny because it was this certificate, but his dad was so cute about it. We lost his dad in 2021, so it’s something we think about and laugh. It’s still framed in their office.

Brando – It’s a good memory. It makes you reflect on the successes I’ve had, maybe not a doctorate or a master’s degree, you know, just a little certificate. I felt really loved from my dad in that moment.

I heard there was a celebration for the family last night, if you’d like to talk a little more about that.

Brando – That’s a good one in the causes we support too. After my dad passed, we were looking for a way to honor his legacy. Previously, the Smith Foundation worked with the Salvation Army dental clinic in Oxnard, but when I contacted them, it had turned out they had shut down. But they had been referring a lot of their patients to the Conejo Free Clinic, which is how I found out about them. So we found out about their mission, we toured a facility with the family, and it was a great connection. We decided to do a five-year $200,000 dollar gift agreement between the family and the Conejo Free Clinic. And last night, we celebrated there with a plaque of my dad, and we’re happy his memory is displayed there.

Karla – Bruno had a dental implant factory. It had been a family business from Italy, and then when he moved here, he started his own branch. So that’s the connection to the dental Conejo Free Clinic.

Brando – We have passions and family interests, and we’re expressing our philanthropic causes locally. You see a real reward there when you’re able to work with the nonprofits and speak with the people and see the results.

Karla – And that’s funding a few things, like an orthodontics program that they were having trouble starting for teens, and a residency program for UCLA dental students. It will elevate the types of services they will be able to offer in the clinic because they’ll have more actual dentists there.

Brando – I would like to mention explicitly my grandpa, who was very important in the formation of the modern Oxnard Valley and Ventura County. The family has gotten a lot from the county, and I feel a deep responsibility to give back. I’m honored I can do that. I’m very thankful we have a foundation like the Ventura County Community Foundation with great leadership and a great culture that can help guide your philanthropic causes and be an ear to listen if you have an interest.