How Scholar Makes a Difference in Others’ Lives

By VCCF
Posted June 2, 2017
In Latest Coverage
How Scholar Makes a Difference in Others’ Lives2017-06-022017-06-08https://vccf.org/wp-content/uploads/2021/10/vccf-new-logo.pngVentura County Community Foundationhttps://vccf.org/wp-content/uploads/2017/03/vcstar-square.png200px200px
(Check out the full story on the VC Star website for more photos and videos)

Brian Nguyen is a self-described science and math guy, so the 18-year-old Rio Mesa High School student was shocked Thursday to find out he’d been selected for a $5,000 college scholarship based on an essay.

“Usually, I think my essays aren’t too great in general, but I guess they saw something in this one,” said Nguyen, beaming after he found out about the award. “I’m a STEM (science, technology, engineering and math) guy. I’m going into mechanical engineering. So to win something with an essay, I’m pretty proud of myself right now.”

For the past two years, he has led a Rio Mesa-based student organization called First Chapter that distributes free books and school supplies to needy students throughout the county and beyond. Under Nguyen’s direction, First Chapter expanded from a student club into an officially recognized nonprofit. He estimated the group has distributed more than 25,000 books since it started.

Nguyen said he was inspired to join and eventually lead the group because he saw many students at his school struggling to buy basic academic supplies. Coming from a single-parent, low-income family, he understood the hardships students with such a background face, he said. Luckily, his own mother emphasized academic success and made every effort to provide for him, but he wanted to help other students who weren’t so fortunate, he said. 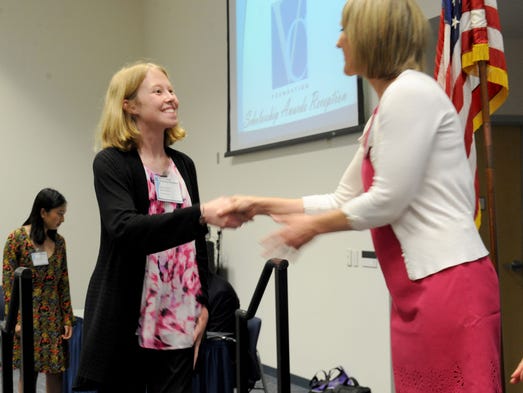 Since taking the helm of First Chapter, Nguyen has spent countless hours working to get it nonprofit status and figuring out how to obtain more donated supplies and distribute them to more students. He and other students with First Chapter have delivered supplies to elementary schools throughout the county, and even to impoverished families in Thailand, he said.

“It teaches you to be almost humble and gives you a sense of where you belong in the community,” he said. “I think to help out other students who might not be receiving the exact same amount of support with books and everything, if they can’t afford those things, I think it’s our responsibility to help prop those students up.”

Nguyen will head to Stanford University in the fall to study mechanical engineering. His dream is to become an astronaut.

The other Star Scholars each receive several hundred dollars from the Ventura County Community Foundation. All are nominated for the award by their high schools and are judged by a panel from The Star.

Thursday’s event also recognized the recipients of more than 400 other scholarships administered by the foundation and worth a total of more than $1 million. The scholarships, funded by donors in the community, are awarded to high school, college and adult students pursuing learning in a variety of fields.

Among them was Juan Perez, a senior at Santa Paula High School who received three scholarships together worth more than $5,000. Perez, who will attend UCLA, said he’s the first person in his family to attend a four-year university and he hopes to go into medicine. Perez said it wouldn’t have been possible for him to attend college without the scholarships.

Vanessa Bechtel, president and CEO of the Ventura County Community Foundation, said students who receive the awards go through a rigorous selection process. This year’s scholars were selected from among thousands of applicants, she said.

“These students are the cream of the crop,” she said. “They are the best of the best.”