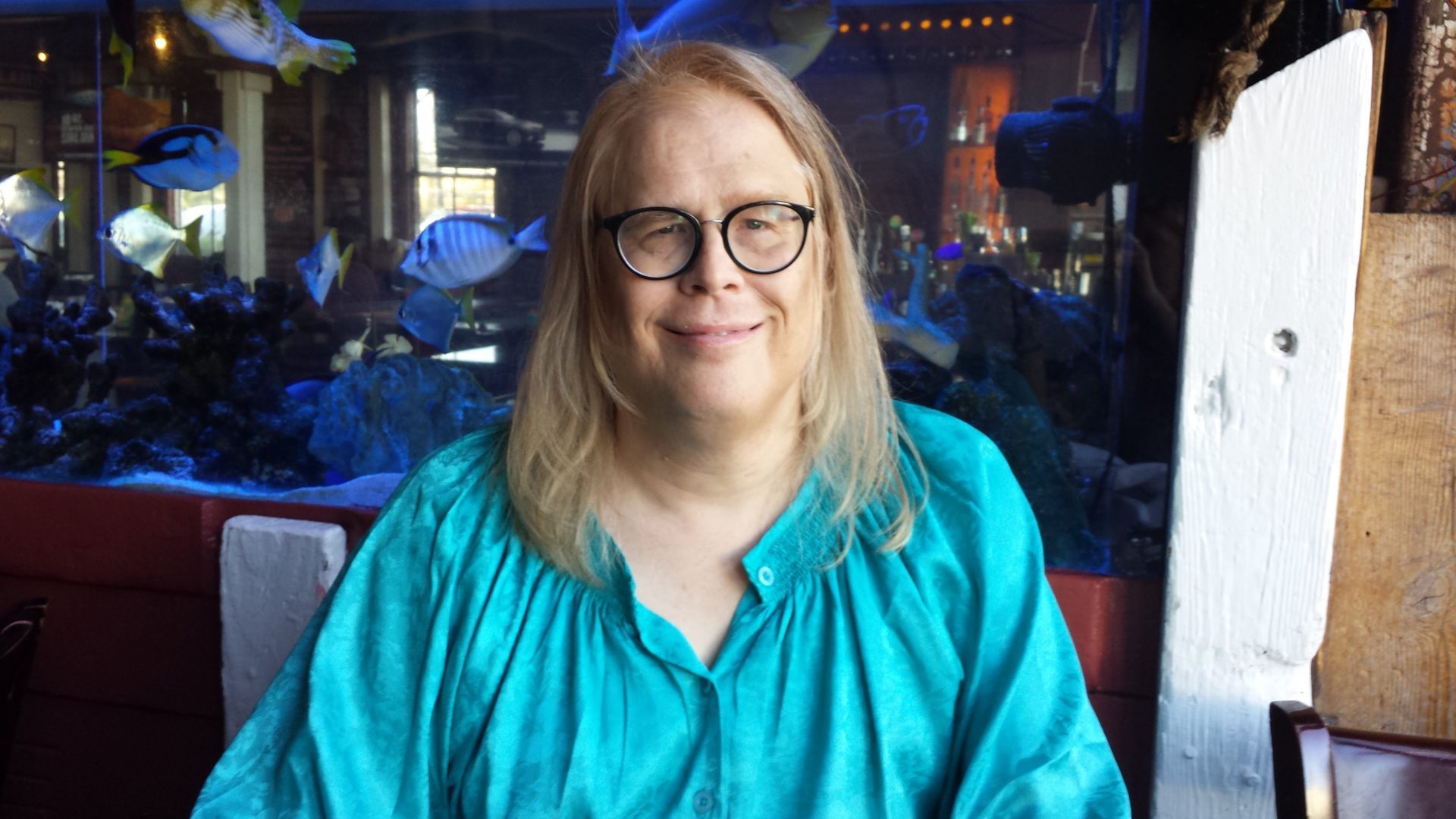 In celebration of Pride Month, VCCF interviewed Kim Engberg, fundholder for the Kimberly J. Engberg Fund for LGBTQ+ Equality and a dedicated supporter of the local queer community.

Kim’s fund completed its first grantmaking cycle in 2021 and she looks forward to its growth in both number of nonprofits and communities served. One group she was proud to support through her fund was Get Loud, organized by Mo Gonzalez. Get Loud is “a queer artist movement celebrating creativity to empower the LGBTQIA+ community in resisting conformity through expression,” according to their Facebook page. The group holds local events featuring local queer visual and performing artists, with community organizations, vendors, and plenty of joyful attendees. “I was so proud to have supported a tiny part of that,” Kim said, regarding her attendance at one of their events at the Oxnard Performing Arts Center.

Kim was born and raised in the Midwest but moved to Ventura County after falling in love with the West Coast on vacation. After working for the U.S. Navy in Port Hueneme since 1983, she retired about six years ago and looked to fill her time with volunteering.

She came out as transgender soon after her retirement, which influenced her volunteering direction. She became involved with several self-help and support groups in the area, introducing her to the local philanthropic and nonprofit community. She has supported the LGBTQ+ nonprofit Diversity Collective, especially in lifting up their youth group, Rainbow Umbrella.

One local project with which Kim has been passionately involved is Conejo Valley Pride. After attending one of their fundraising events, she signed up as a helper, and the group gladly welcomed her help by assigning her different tasks. Before she knew it, she found herself on their Board of Directors. Dedicating great time and energy to working on their 2018 and 2019 celebrations, she met incredible people and loved the experience.

As Conejo Valley Pride, like many community projects, has been put on pause due to the COVID-19 pandemic, Kim looks forward to volunteering again someday soon. Beyond LGBTQ+ issues, she is also passionate about supporting the environment, animal welfare, and marginalized groups like the African American community.

When did you decide to create the Kimberly J. Engberg Fund for LGBTQ+ Equality, and what was the process of establishing the fund like for you?

I was always thinking about what my legacy would be, what I would leave after I was gone, and I wanted to make sure that the world was a little better off from my having been here. And since I’m probably not going to have children, I decided instead to leave my money with a fund that would help people out in perpetuity. So, I was fishing around, asking people how I would start a nonprofit, and I was talking to my friend Narissa Jimenez-Petchumrus who I worked with on Conejo Valley Pride, and they pointed out that VCCF was in that area, that they would help me set things up.

So, they gave me Jim Rivera’s email address and I wrote to him, and Jim and Vanessa just totally rock. They made it as smooth as glass trying to get this thing set up. They were very easy to work with. And I had a couple conversations with them, and we discussed what I wanted, and we went over a fund agreement. I came back with certain mark-ups and questions, and we marked it up and they revised it and sent it back to me. Eventually we came up with an agreement, and they just made the process so easy. They took all the work out of it, all the stress out of it. They relieved a lot of my questions, a lot of my worries, and I just can’t say enough about that!

How have you seen philanthropy lift up the LGBTQ+ community?

Queer people can feel very alone. They might not get acceptance in their family, in their job, or from their friends, so there are a lot of support systems that are needed. It really helps to find people like you that you can talk to and give you help and encouragement. I know it’s helped a lot for me meeting other transgender people, mostly online. And we need this kind of support, and we need visibility so people can see that they’re not alone. They can see other people express themselves; artists, for example, express things they might not have the words for. They just need people that can help them understand themselves, understand what they’re going through, support groups, therapy groups, things like that. And we just need to get together and increase visibility because I think with visibility comes acceptance, and we need both public support in the form of arts and advocacy, and also private support and personal support in things like group therapy and counselling. There’s a lot of groups that support and provide these things, but there’s not enough to meet the current need.

Do you have any favorite stories connected to your experience with philanthropy?

When I was working on Conejo Valley Pride, I was representing the festival for various organizations and helping to publicize it, and I remember one group I addressed was the Democratic Club of Conejo Valley and I gave a speech there. It was 2018; it was an election year. There were also some very important candidates there who were also on the campaign trail at the time, a number of them were sitting at the table with Kevin de León, who was running for U.S. Senate, and Henry Stern, who was the State Senate representative for the area. I just thought it was so amazing that I was sitting, little old me, right next to these really important people, having access to them to discuss these issues with them. And being a representative from my community in front of such important people, I was feeling like, “Wow, this is me, I’ve really arrived!”

Is there anyone you look to for inspiration in how you support your community?

There are quite a few people actually, and working with groups and volunteering, lucky to meet a whole bunch of really amazing people. I feel like what I’m doing is nothing compared to these people, they’re doing the really hard work of actually organizing the groups, putting everything together, and it’s really a lot more work than I would care to do. There are people like Narissa Jimenez-Petchumrus who organized Conejo Valley Pride, they were just lamenting the situation one day after the 2016 election thinking how bad things were getting, and they were saying, “Why don’t we have a pride festival here?” Instead of saying “Why doesn’t somebody do that?”, saying “Why don’t I do something about that?” They actually went and did something about it! And they put the whole thing together and organized the group, and I am really amazed with them how they were able to do that.

Mo Gonzalez, who I also mentioned, who has done the Get Loud movement, that’s another big venue for queer expression in the community. There are people like Joseph Summers who is a former president of Diversity Collective, who really did a lot of amazing work there in running all the different programs they have there. Anne Blakeley, who ran one of the first transgender support groups I was in, and she was one of the first people I met in the community, and she did so much for everybody. There was no limit to what she could do for you if you needed help. And unfortunately, she’s left the community, so she’s not in the area anymore, but I still look up to her a lot. Someone like Audrey Ford who I first met in a support group, and they work with Rainbow Umbrella under Diversity Collective. They are very active in doing that. There are so many people around and I keep running into them all over the place, I’m just amazed, where do you get the energy to do this? Because it’s not something I have the patience to do myself, so I’m just glad I can support these people and be the wind at their back if I can do nothing else.

Do you have any messages for our readers as we reach the end of Pride Month?

I wanted to point out that Oxnard Pride is coming up (on Saturday, June 25), and I’m planning on going to that.

It seems like we’ve come a long way, and we have. I’m 60 years old, so I’ve seen times when queer people weren’t accepted at all. You could easily get fired from your job for being queer. And now, it seems like we’ve got a lot of acceptance, we have marriage equality, we’ve got anti-discrimination laws.  But we’re so under-attack from so many different corners, both in this country and the world. And there’s still a lot of work that needs to be done. The fight isn’t over yet. We still need to get full rights; we still need to get full acceptance. We hear of acts of violence being committed all the time, so even our safety can’t be assured. There’s a lot of work ahead of us, even though it seems like we’ve accomplished a lot.

If you would like to learn more about opening a fund at VCCF, please email Calleen Pardinas at cpardinas@vccf.org.