The 2020 census count in Ventura County had been going so well, officials say.

The percentage of county residents who had thus far taken the census — 72 percent as of this week — was higher than the state and national percentages.

Everything was looking good for a complete count by the Oct. 31 deadline, which would ensure the full amount of federal funds — billions of dollars — coming to the county over the next decade.

And then the U.S. Census Bureau dropped some bad news.

Director Steven Dillingham announced Monday that the count, which began March 12, was going to end a month earlier — Sept. 30 — “to accelerate the completion of data collection and apportionment counts by our statutory deadline of Dec. 31, as required by law … without sacrificing completeness.”

Vanessa Bechtel, CEO of the nonprofit Ventura County Community Foundation, which has raised about $1.7 million for marketing to get the word out to residents to take the census, didn’t welcome the news.

“I think it’s really unfortunate,” she said Tuesday. “We had developed a strategy that was going to take us through October and we really needed that time to do more outreach in person as things were (possibly) going to start reopening.”

A spike in COVID-19 cases in California has instead led to a tighter lockdown across the state, including in Ventura County.

“So, this is going to be very difficult,” Bechtel said. “We’re going to have to figure out how we adjust to the new count deadline, develop a more urgent strategy and just do the best we can to get a complete count.”

An undercount would have “disastrous” financial consequences for Ventura County, she said.

Each uncounted person represents an estimated loss of $2,000 annually for 10 years in federal funds to the county, she said.

If 100,000 people were missed, that would represent a loss of $2 billion for health care, social services, law enforcement, business loans, water systems, transportation and other services, she said.

An estimated 596,000 county residents have been counted so far, Bechtel said. 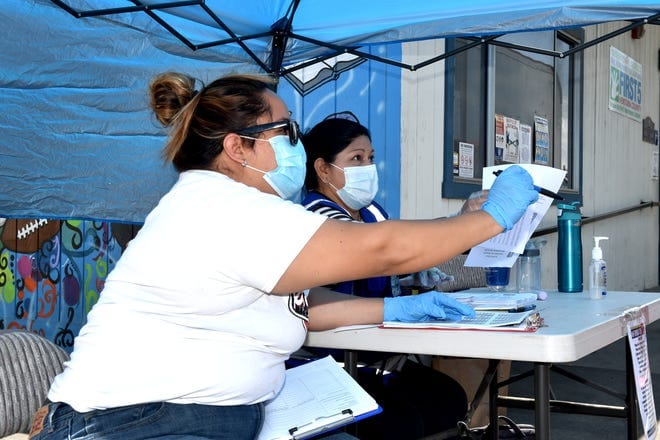 On Wednesday, in an emergency meeting of the steering committee of the Ventura County 2020 Complete Count Committee, a new game plan was formulated to try to achieve a complete count despite the shortened deadline, said Bechtel, who is a co-chair of the committee.

The committee is comprised of the foundation, census workers, local nonprofits, the county, cities, faith-based groups and service clubs, she said.

Bechtel said she thinks the updated plan will help assure a complete count.

“Especially the business outreach because we know employers can help dramatically reaching out to their employees,” she said. “That is critical.”

Constitutionally mandated every 10 years, the census aims to count the entire population of the United States, according to the Census Bureau.

Federal funds, grants and support to states, counties and communities are based on population totals and breakdowns by sex, age, race and other factors, the bureau says.

The count also determines how many seats states get in the U.S. House of Representatives.

Based on federal research, Ventura County was ranked a few years ago by the bureau as one of the most at-risk counties in the nation for an undercount in the 2020 census, Bechtel said.

Bechtel said that was due to income, educational and geographic barriers, as well as many residents lacking internet access. The census is being conducted largely online, she said.

In response to the poor ranking, the various community groups that comprise the complete count committee came together to address it.

“And we committed to not let that be our reality,” Bechtel said.

The commitment paid off, she said.

The county is now ranked by the Census Bureau in the top 10 percent of counties in the nation for an accurate count, she said.

“I think we’ve really turned it around,” she said

The favorable ranking is based on how many people in the county have been counted so far, which is tracked by the Census Bureau, Bechtel said.

As of Wednesday, Moorpark had the highest percentage of any Ventura County city of residents who have taken the census, at 79.2 percent.

Port Hueneme had the lowest at 63.9 percent, which nonetheless is higher than the national percentage, Bechtel noted.

The coronavirus pandemic has impeded efforts to get a complete count, Bechtel said.

For instance, while the count is currently in a phase in which census workers were supposed to be going to the residences of people who have yet to complete the survey, the workers haven’t been able to because of COVID-19 restrictions, she said.

And plans to place nearly 200 kiosks with census information throughout the county haven’t been realized because of health concerns, she said.

“So, COVID really has been disruptive,” she said. “But we’re resilient and we all just said, ‘OK, this is our new world. We need to do things differently.’ “