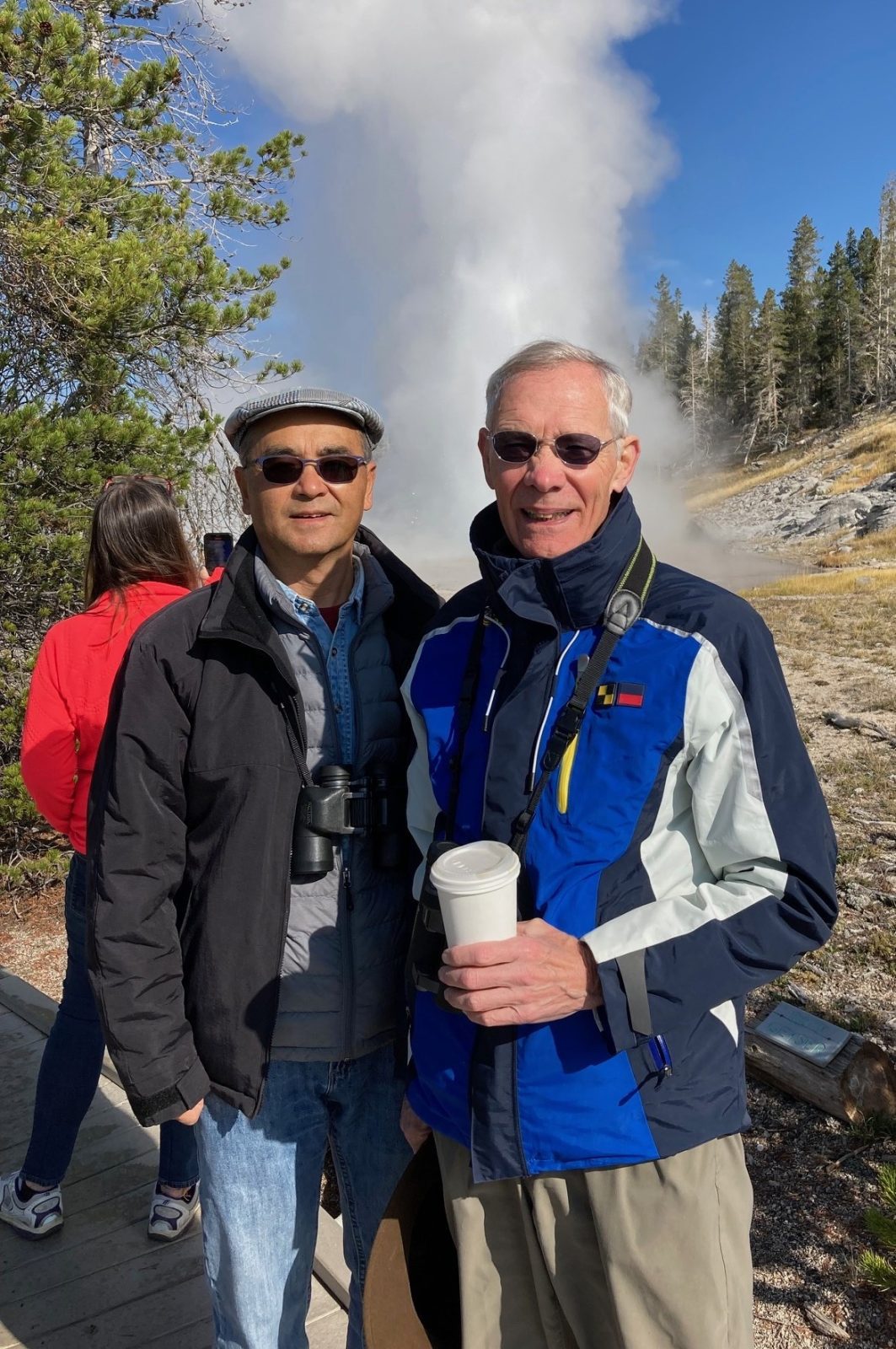 Jerry and BJ have a mission to visit all national parks someday, pictured here at Yellowstone National Park.

Jerry Clifford and BiJian “BJ” Fan have only been VCCF fundholders for eight months and are already having an impact on the lives of children in the community. Both Jerry and BJ lived around the world before settling down in Ventura County, hailing from Chicago and China respectively. Jerry worked for the Air Force for many years, with a career focused on research and academia in nuclear physics, while BJ’s background is in pharmaceutical biotech research and development. The two met through an outdoor group in Albuquerque, eventually landing together in Ventura County for BJ’s position with Amgen in 2004.

The couple is now retired and both give back to their community through their work with California State University, Channel Island’s Osher Lifelong Learning Institute as lecturers helping older adults maintain their mental capabilities. BJ also spends his time as a visual artist and volunteers with Studio Channel Islands and Focus on the Masters’ educational programs. His particular passion is teaching STEAM (science, technology, engineering, art, and math) to students and he leads a program for kids called Origami Math Genius, or OMG that explains math concepts through origami art.

Jerry and BJ learned about VCCF over time through its involvement with nonprofits they support, such as the Social Justice Fund and the Boys & Girls Club of Camarillo, of which Jerry is the Chairman of the Board. Jerry also befriended VCCF Board Chair Sean Leonard through their service together on the Studio Channel Islands board.

What influenced your decision to open a fund at VCCF?

BJ: We both are retired and were thinking about our legacy. When we die, we all have to face this decision: what are we gonna do with some of the resources we have accumulated over the years? I wanted to leave some of my money to the local community of Ventura County. So, we started to look around. We heard of VCCF before, and now we were seriously looking into what kind of vehicles we have.

Jerry: Sean knows me well and knows my interest, and it was Sean who said, “Why don’t you meet Vanessa?” So, we had a meeting with Vanessa at VCCF, and we’re very impressed. Vanessa really is super at presenting VCCF and answered the tough questions. We also have a financial advisor who has been very helpful. And in the past, we had a donor advised fund with ImpactAssets.

Jerry: What we didn’t get out of it was that we didn’t have someone advising us on what places would be the best for spending our assets, and that’s where we felt VCCF would be helpful to us. Because, for example, one of the big things that happened to me, I went to a Meadowlark [Service League] luncheon where they handed out probably 25 or 30 checks to nonprofit organizations, and I thought to myself, “Wow. I did not know there were that many nonprofits,” and everyone sounded great. And I said to myself, “Well, I don’t know enough for how we should give it.” Between Jim Rivera and Vanessa, we felt very comfortable with the donor advised fund aspect of VCCF.

BJ: I think the value of VCCF to me is they actually did all the research, so they can really advise us, not only on the nonprofits’ mission, but on their financial status. So that’s very valuable to us, because you want to give your money to generate some impact in your community.

So far, your grantmaking has supported children and education. How did you identify these causes as important to you?

BJ: We both are now educators, so education is in our blood. And we also feel particularly that for children, early childhood education will have an impact on their lives, so I think that’s one thing we want to focus on. In Ventura County, we have a lot of families that are underprivileged and need that kind of support.

Jerry: For me, maybe 10 years ago, I started something called the Summer Science Academy. First one was at Rio School District. And it was a three-week summer program focused on fun science activities. It was totally run by the school district. John Puglisi, the superintendent, thought the idea was great right from the start. We started with four classrooms for kids, four teachers. It was eight hours a day for three weeks in the summer, which was amazing, especially in the communities that we were targeting. And it was so successful at getting kids excited about learning. It wasn’t about science; it was how to have fun and make it educational. And to me, that was eye-opening. I loved doing that. I would spend three summers at one school, and then I’d move to a second school, so I went to Santa Paula; we repeated it there. And then Covid hit, and I didn’t continue mine, but I know Rio School District is still very active, and now they have hundreds of kids, many classes, and they have done an assessment to find out how helpful that is. The kids who go through that program, even though they may start as the worst students in the class, are now the top performers. It’s showed how important it is getting kids involved in something they like.

Do you have any favorite stories about giving back to your community?

BJ: I was volunteering with Focus on the Masters, and I was profiled by them. One of the educational programs is “Learning to See,” so they bring the art program to all the local communities, mostly elementary schools, to bring artists to the school and teach about their story and then inspire the children to be creative and to use critical thinking. So, I always enjoyed going to schools and gave some hands-on demonstration of origami or told them stories and put a real person in front of them, particularly as an immigrant, and encouraged them to express themselves to explore the world.

What’s your best advice for others who want to make a difference?

BJ: I think it’s time actually to think of your future, particularly your end-of-life decision. And even though we’re still vital, we’re still doing lots of things, everybody’s life will have to end at some point, and particularly for those who are fortunate to have some resources, how do you want to pass your legacy to the community?

Jerry: You have to do a little homework. You gotta really think about what is important to you, and that will carry on through your giving opportunities. BJ and I did not know enough, so you gotta work with people that have backgrounds and insight into these things. I would start as soon as you can, because it helps you think about and answer your own questions; people ask you good questions and make you think. For example, in setting up our fund, we had to identify what areas of interest we had. We started with our list, which is probably 15 or so charities we give to right now, but then how do you break that down into areas and say which ones? And then how do we write that? So, with Jim Rivera’s help, we got it shorter, and we got it more general topics, and I think we ended up with three. But that takes a little bit of thinking and work with someone like Jim to help us out there.

BJ: We’re not experienced in this area, so I think it’s important to have experts not just in philanthropy, but also the legal, and administrative assistance from VCCF that we feel is very helpful, guiding us to think through those questions.

If you are interested in opening a fund at VCCF, please contact Jim Rivera, Chief Philanthropic Counsel at jrivera@vccf.org or (805) 330-6679.