Charities in Ventura County Prepare for Transfer of Wealth

The transfer of wealth tied partly to inheritances left by the Baby Boomers has been described as great and historic.

In Ventura County alone, the boomers and other generations could transfer $230 billion over the next half century, a new study shows. Nor is it just the heirs of the post-World War II generation born from 1946 to 1964 who stand to benefit.

Local charities could share in the windfall to the tune of $884 million by the middle of this decade, the CEO of the Ventura County Community Foundation told nonprofit leaders at a standing-room only meeting Tuesday on the transfer and its potential. Estimates show they could reap $11.5 billion by 2065.

“This is a once-in-a-lifetime opportunity,” CEO Vanessa Bechtel told more than 100 people attending the presentation at the foundation’s headquarters in Camarillo.

The foundation paid $25,000 for the first known study of the transfer of wealth in the county, an analysis that includes both national and local data.

Among the trends reported by author Jamshid Damooei:

Damooei, professor of economics at California Lutheran University in Thousand Oaks, said in a brief interview that he doesn’t have the evidence to show the transfer is the largest in history. But he called the event “very significant.”

“This county has lot of wealth, and it’s coming down,” he said. “We need to take advantage of this potential and plan for it.”

The foundation commissioned the study because the organization seeks to build philanthropy with estate gifts, plus charities across the county stand to benefit, Bechtel said.

“We are in the midst of a national historic wealth transfer, and I think it’s important for people to understand what the potential is on a local level if we all work together,” she said. 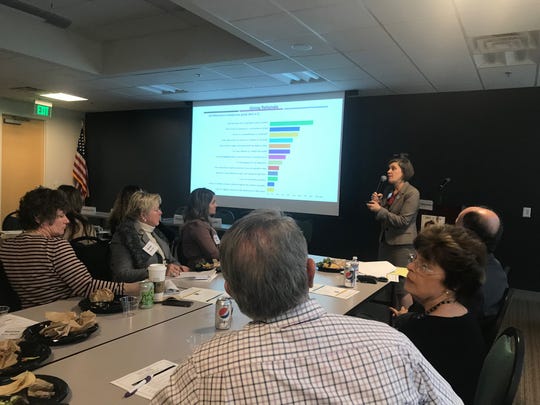 Vanessa Bechtel, CEO of the Ventura County Community Foundation, speaks at a session on the $230 billion transfer of wealth expected by 2065. (Photo: KATHLEEN WILSON/THE STAR)

Officials say local charities face competition from better financed nonprofits outside the county to get their fair share.

“The bigger universities and bigger institutions have huge planned giving departments and huge development departments,” Bechtel said. “The majority of our nonprofits don’t have that type of infrastructure. We have to join forces to do this work. We have to work collaboratively.”

Already, she said, the data from the study is serving as a catalyst for charities to lay the groundwork for garnering these gifts. Ventura County’s nonprofit sector reports revenues exceeding $2 billion annually, but does not appear to be as well financed as those in neighboring counties, according to a recent report from the Ventura County Civic Alliance. County charities reported per capita revenue of $2,466 in 2017, well behind Los Angeles County at $5,636 and Santa Barbara County at $9,625.

The rates are based on federal tax forms filed by nonprofit agencies with at least $50,000 in gross receipts. Excluded are private foundations, which are largely funded by an individual, family or company.

Some nonprofits in the county are well positioned to capitalize on the wealth transfer, while others are not, said Dena Jenson, director of the Center for Nonprofit Leadership at California Lutheran University, which convened the event.

Some charity officials may believe their agencies don’t have the skills or the capacity to build relationships with donors that will yield major gifts, but this is a time to act, she said.

Charities need to get their planned giving efforts in top shape, meet with organizations that have common missions and raise public awareness of the importance of nonprofits, she said.

“We have to keep talking about it and not in our little silos,” she said. “The needs are community-wide so the solutions need to be as well.”

This story was originally published by the Ventura County Star.